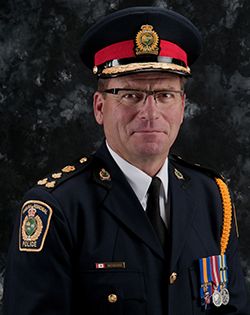 On June 4th 2018 Jeff McGuire started in his current role as Executive Director of the Ontario Association of Chiefs of Police (OACP).

In 2011, Jeff was invested as a Member of the Order of Merit of the Police Forces (M.O.M.) by the Governor General of Canada and in 2017 he was elevated in the Order to Officer of the Order of Merit (O.O.M.) Jeff has also been awarded the 20 year Police Exemplary Service Medal, the 30 year Bar and the 40 year Bar by the Governor General of Canada. In 2012 he was awarded the Queen Elizabeth II Diamond Jubilee Medal in recognition of his community service.